Infinity Reels slot games use a very unique and exciting ways to win mechanic, they were first released into online casinos in the year of 2020. El Dorado Infinity Reels was the very first pokies machine using this mechanic that happy players got their hands on and loved, the rest is history.

The Infinity Reels ways to win system that has gained a big following among players at online pokies casinos. Designed by an Aussie based company called ReelPlay they have really got some competition going for the Megaways games.

These pokies look at first glance quite the “brain ache” for the new punter to understand but they are really quite easy to understand once you get going, in fact you will master them in just a minute of game play.

As the name “Infinity Reels” may suggest, players have an infinite number of reels that could “be in play”. Well that’s if you have never ending luck of course. All winning streaks come to an end at some point as players do know.

Infinity Reels continuously adds “extends” more reels onto the right of the game reel set with every win. When you add reels with a win you get another reel in-play and a free spin, but when you do not get another win from a free spin the reels will reset back again to its normal state of usually 3×3 or a 3×4-reel grid format. So, in reality the game is very simple to understand.

Get a win > you get a free spin with 1x symbol win multiplier added and 1x extra reel > this continues with every win > no more wins = reset back to default reel start format. 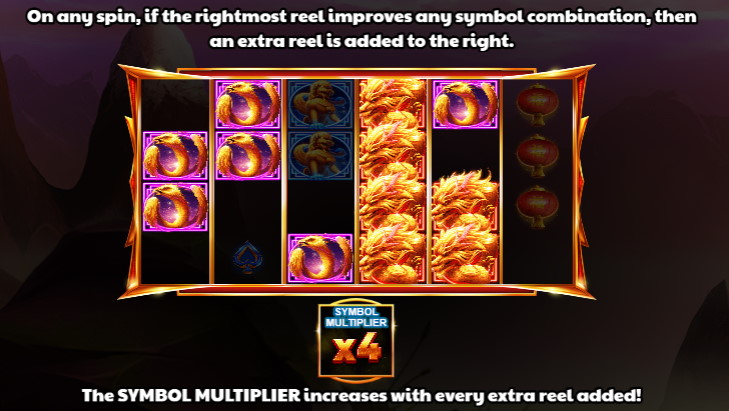 When you get more reels added for each win you also are awarded an extra multiplier symbol win factor of 1x. this will grow by 1x symbol multiplier with every win and reel addition.

Like all gambling you are not going to have Infinity winnings that’s for sure, we have had a maximum amount of 14 reels in-play when playing for real money, this ensured a great pay-out due to the multiplier symbol bonuses that were awarded with each reel extension and free spin.

These pokies will be as the popular as Megaways games in the years to come, in fact we personally like them more than Megaways games as the screen is not so busy visually with these slots so they won’t make you dizzy when playing.

Infinity Reels pokies are exciting and generous in the base game, not to mention the cracker bonus features, jackpots and bonus buy features that the games use.

Infinity Reels has been used in many games and we have them available to play free directly from our site in the demo mode – enjoy!