HOW TO PLAY MEGAWAYS SLOTS

At pokiescasino777 we are often asked about how Megaways slots are played, well don’t be worried as they are pretty simple overall to understand. The base game revolves around the “mechanic” then you will have various exciting bonus features like bonus buys, cascading reels, wild multipliers, free spins, unlimited win multipliers and my personal favourite the mystery symbols.

The Megaways system is a basically a “random reel modifier” this system in a nutshell alters the number of game symbols that land on each reel for each spin. So, by varying at random the amount of symbols that appear on each game reel, tens of thousands, hundreds of thousands or even a million ways to win are possible at every spin.

Visually the games are very busy and some may make you a bit dizzy, but it’s all part of the fun.

Just the name might give you the vibe that these games are complicated by design, but in reality, even granny will be able to understand the system easily. In most Megaways pokies you will have six reels and up to seven symbols that can land on each reel.

As said the number of symbols that land is chosen by the Megaways system randomly, this is constantly changing unlike regular boring games that have a set amount of paylines. So, this creates many thousands of ways to win with every press of that spin button.

As a basic example for most games in the series, if all six game reels are showing the maximum number of seven game symbols per reel this would be calculated at 7x7x7x7x7x7 which = 117,649 winning ways. 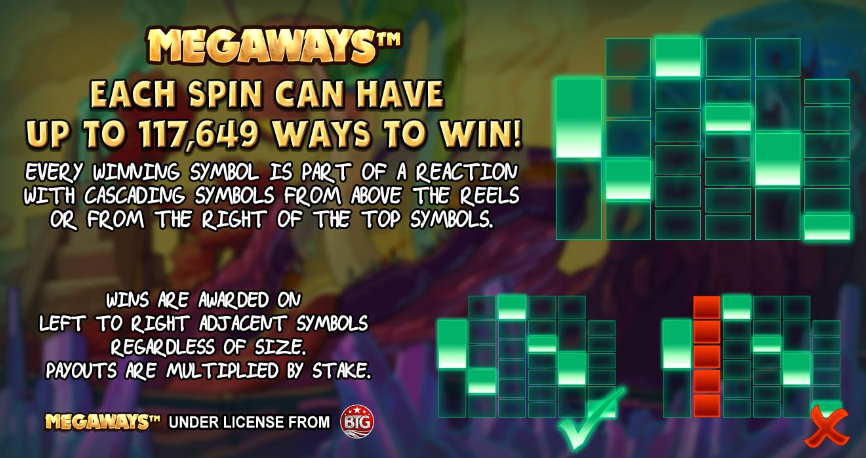 It is worth noting that most Megaways pokies provide up to 117,649 ways to win. But several games do differ to the regular format, In Super Joker you have only 512 ways to win, In Gorilla Gold there are 470,596 ways to win and in Wheel of Fortune you have a whopping 1 million ways to win.

These games are win big or go home by design so the volatility is usually high in most games with some having a medium volatility and none have a low volatility as far as we know.

The Megaways system was invented by the Aussie pokies software maker Big Time Gaming, the first game in the series named Dragon Born was released in 2015, the next games were Queen of Riches and Star Quest. The fourth game in the series was Bonanza, it was released in 2016 and this was the pokies machine that really got the punters eye and wanting for more Megaways games.

At last count you can play more than 100 plus free or real play games with the Megaways system. All the big game makers in the business like iSoftBet, NETENT, WMS, Bally, Red Tiger, SG, Inspired, Blueprint, Pragmatic Play, Irondog, Stakelogic, ReelPlay and Microgaming have licensed and released games with the Megaways mechanic in-play.

You will not go back to play ordinary games after playing Megaways pokies, you won’t want to play progressive jackpot games ever again when you have such incredible ways to win opportunities with these slots.

Some players even say these online games should be available at land casinos as they are just as good as any IGT, Aristocrat or Ainsworth slots. Anyways please enjoy our free Megaways demo pokies direct from our site.